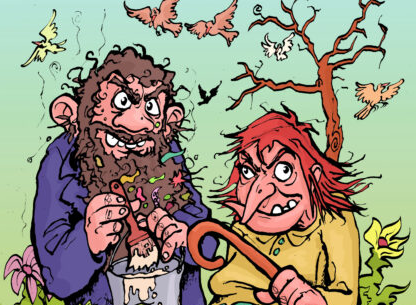 The PumpHouse: The Twits by Tim Bray Theatre Company

Celebrating 30 years by bringing two of our cherished shows back to the stage.

A delicious Roald Dahl creation. Mr. and Mrs. Twit are nasty and love playing tricks on each other. The things they get up to are a sight to behold! Would you like a glass eyeball in your drink? How about some worms in your spaghetti? Who doesn’t like a slimy frog in their bed? And would you believe how they make their favourite treat, Wednesday Bird Pie….it’s a sticky idea. Their antics will have you gasping in amusement and giggling along.

But when Mr. Twit turns his nasty attention to creating the World’s First Upside-Down Monkey Circus with Muggle-Wump the monkey, things get turned upside down and the Twits get a dose of their own nasty ways.

Dress up in character! We love to see imaginations running wild and encourage our young audience to dress up as their favourite Margaret Mahy character. We will take a moment to show off the costumes onstage with a parade at the start of the performance (Note: School holiday and Saturday shows only).