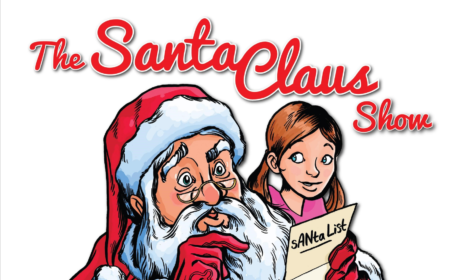 The PumpHouse – The Santa Claus Show: on the Big Screen

The razzle-dazzle of Christmas is coming back to the theatre!
Join us in celebrating the jolly season with special screenings of our 2017 season of The Santa Claus Show. Relive the magic of this special performance with your family and get into the festivities. Join young Kelly, her next door friend, Alana, and the cast of joyous characters in this journey of Christmas Eve. Sing along, giggle at Elfie’s antics and share this very merry, Auckland adventure with the message of giving.

“This slick and stylish show is guaranteed to get you in the mood for Christmas.”

“The Santa Claus Show is a lovely tale with a moral about generosity and giving that avoids being saccharine. My two kids (3 and 4-years-old), found it both very funny and magical.”

We’re doing it a little different this year. In lieu of the live performance and due to Covid restrictions, we are screening the video recording of the 2017 Season of The Santa Claus Show. Captured for our archives, we feel now is the time to bring it out and share with our audience, for maximum Christmas cheer!

Special arrangement have been made with the Jolly Man himself and we have elves on hand to take all special lists and notes for Santa, to be delivered straight to the North Pole after the show. So be sure to bring your Santa Lists along.

We would like to thank the cast, crew and creatives involved in The Santa Claus Show ‘17 for their kind permissions in allowing us to screen the show. Many have elected to donate their royalties from these screenings back to the theatre company. Thanks too to The PumpHouse Theatre for their support in making this event happen. Kia ora koutou!