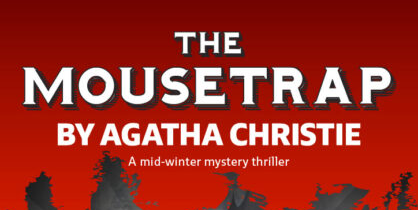 The PumpHouse: The Mouse Trap by Agatha Christie

Eight people snowed in a country manor – what could possibly go wrong?

A timeless tale of “whodunit”, Agatha Christie’s The Mousetrap strands seven strangers at Monkswell Manor during a blizzard. When a police sergeant unexpectedly arrives, worried that a murderer-at-large is among the group, everybody becomes a suspect. Then one of the guests is killed. One of them is the killer. One of them may be next.

Agatha Christie balances suspense, social commentary, and a dangerous wit all within one play. No wonder The Mousetrap remains one of the most popular plays in the English language.

After a 69 year run in London, Shoreside Theatre is delighted to bring Agatha Christie’s The Mousetrap to the PumpHouse Theatre in July 2021.

For more information and to book tickets, please visit The PumpHouse website here.