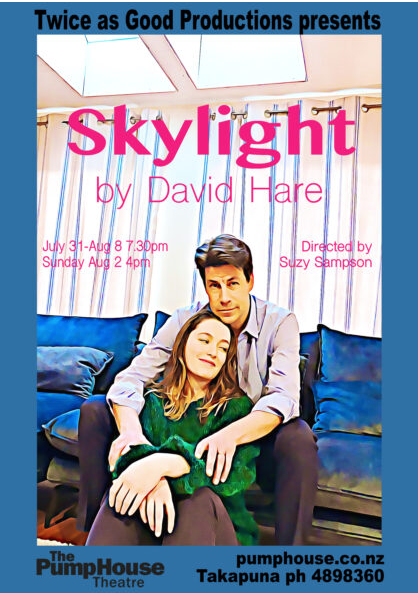 Olivier and Tony Award winning play about two people bound together by a shared memory of passion, but divided by income and attitude.

Tom Sergeant is a rich restaurateur who visits Kyra Hollis in her cold Kensal Rise flat. Tom is still suffering from guilt and grief over the death of his wife a year ago. He seeks consolation from Kyra, who was once his co-worker as well as his lover, and finds that she has achieved fulfillment by teaching difficult kids in an East End school.

“Hare’s first rate play hits you right between the eyes with its mixture of private pain and public rage.” – UK Guardian

David Hare: Playwright
Sir David Hare is an English playwright, screenwriter and theatre & film director. Best known for his stage work, Hare received Academy Award nominations for Best Adapted Screenplay for The Hours and The Reader.
In the West End, he had his greatest success with the plays Plenty, which he adapted into a film starring Meryl Streep, Skylight (1997), and Amy’s View which all received Tony Award nominations for Best Play and Laurence Olivier Awards for Best New Play. He has several critics’ awards such as the New York Drama Critics Circle Award and received the Golden Bear in 1985. Skylight received Tony and Olivier Awards for its 2015 revival starring Bill Nighy and Carey Mulligan.

Vist The PumpHouse website for further details, tickets and times.