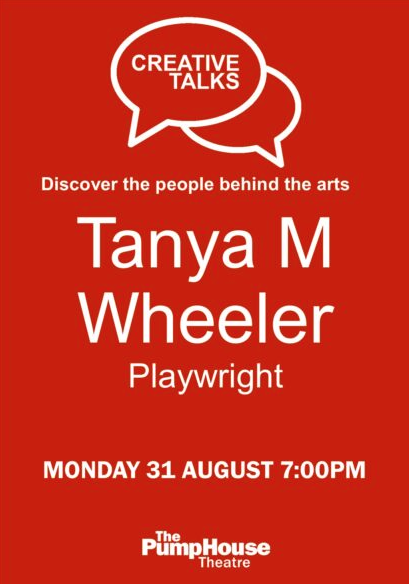 TANYA WHEELER WILL NOW GIVE HER CREATIVE TALK 31st AUGUST

Tanya M Wheeler has always written but only stopped being a teacher and started calling herself a ‘writer’ twelve years ago.

She found novel writing very hard so when she discovered screenwriting, it was a revelation. She fell in love and has since written prolifically in every genre and format- everything from historical, to action via romance, comedy, family, animation and horror themes – for web series, feature, TV, short film and eventually stage as well. Her stage adaptation of Jane Austen’s ‘Persuasion’ was debuted here at The PumpHouse Theatre in February 2017.

Tanya has written and consulted on a number of award-winning short films, and has been a finalist, semi-finalist or winner in sixteen screenwriting competitions. Currently working on writing another couple of plays, and producing a short film, Tanya has taken time out of her busy schedule to come and share her creative process with an audience at The PumpHouse – a place she has loved since she was 10 and saw George Henare here perform as Snoopy .

Stories are at the heart of creativity. The PumpHouse Theatre’s series of Creative Talks is an informal early-evening event where local artists and creatives share their stories and ideas with our community whether they have a lifelong passion or are new to the arts.

This programme of free Creative Talks spotlights a wide range of the arts, giving audiences a behind the scenes insight into the world of the creative process.

From multicultural arts to theatrical performance, by way of actors, authors, poets and playwrights, there is something for everyone with an interest in the arts and what inspires and drives creativity.

Creative Talks are held monthly at The PumpHouse Theatre and entry is free, but reserve your seat through The PumpHouse website, here.
Encore Theatre Collective is proud to present a dazzling new production of Seussical The Musical, based on the immortal works of Dr Seuss. Seussical brings to life many infamous and well-loved Dr Seuss characters, including Horton the Elephant, Gertrude McFuzz, Mayzie La Bird and, of course, the Cat in the Hat. These characters and stories weave together in a whimsical and wacky musical extravaganza, played out against an uplifting score, and highlighting the show’s universal messages of love and acceptance – reminding us all that “a person’s a person, no matter how small.”