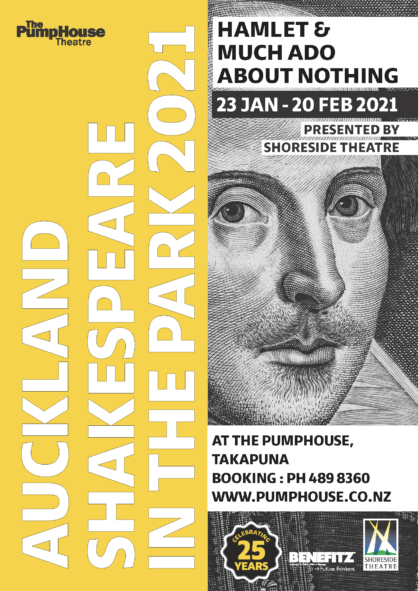 The PumpHouse: Auckland Shakespeare in the Park 2021

As the summer evenings settle, enjoy traditional presentations of two of Shakespeare’s finest plays performed outdoors in The PumpHouse Amphitheatre.

Now in our 25th season, Shoreside Theatre’s Auckland Shakespeare in the Park is presented by a company of professional and community actors, production crew, enthusiasts and supporters with the aspiration to stage real Shakespeare. As always, both plays feature fabulous costumes and passionate performances.

Directed by James Bell
Indecision, revenge and retribution, deception, ambition, loyalty and fate lie at the core of arguably Shakespeare’s most famous tragedy. Hamlet, Prince of Denmark, has multiple woes.

The ghost of his father haunts Elsinore; his uncle, Claudius, has married Queen Gertrude, his mother, and assumed the throne; and  Fortinbras of Norway threatens Denmark with an invading army.

Hamlet’s complexity, philosophical richness, the unforgettable language and imagery of Hamlet’s soliloquies offers an incomparable portrait of a brilliant but tortured Renaissance scholar whose world has been destroyed.

MUCH ADO ABOUT NOTHING – book here

Directed by Jason Moffatt
Love, verbal-sparring, villainous schemes and mistaken identity are delightfully interwoven in Much Ado About Nothing, which brings us the unforgettable romance of Beatrice and Benedick, surely Shakespeare’s best loved romantic duo.

Returning from the wars, Don Pedro, the Prince of Aragon, and his retinue arrive at the home of Leonato, the governor of Messina. Amongst Don Pedro’s companions are Benedick, a sworn bachelor, and Claudio, a young nobleman smitten with Leonato’s daughter, Hero.

Love and masquerade, wit and warfare, perception and reality – all collide in one of Shakespeare’s cherished comedies.