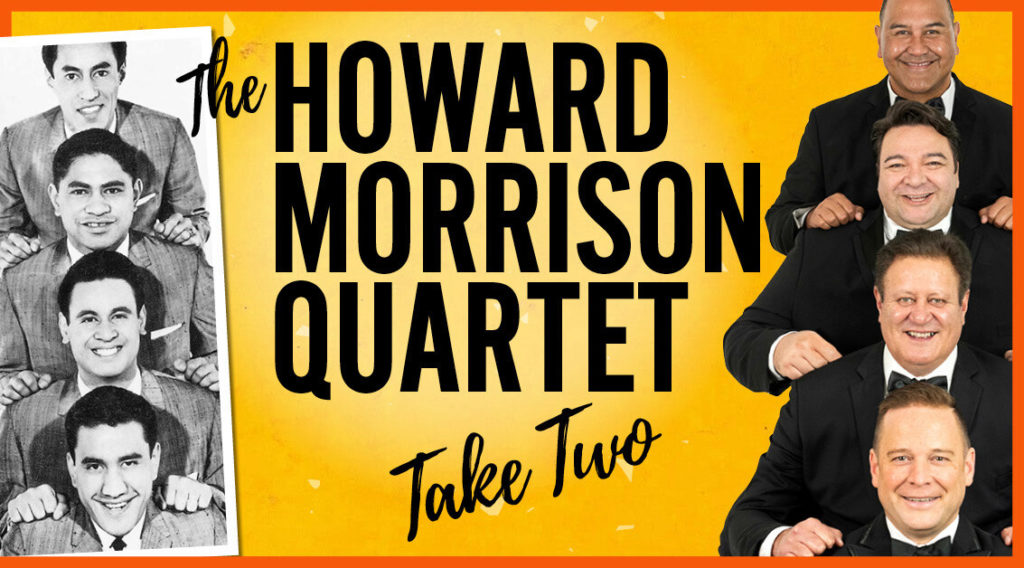 The Howard Morrison Quartet is considered this country’s most successful show band, and helped create the New Zealand entertainment industry. Merging family-friendly music with unique New Zealand humour, the Quartet toured constantly during the 1950s and ‘60s and reformed regularly throughout the subsequent decades, remaining hugely popular.  Its charismatic lead singer, the iconic Sir Howard Morrison, also enjoyed a stellar solo career over many decades, plus the love and respect of his country for the huge amount he gave back to the community.

Timed to mark the tenth anniversary of Sir Howard’s passing, the show will bring the old Quartet back to life through the talents of the next generation led by Howard Jnr, best known as a leading figure in kapa haka and his outdoor adventure television series, who also performed from a young age on the concert stage, including with the original Quartet.  All outstanding performers, Howard Morrison Jnr, Russell Harrison and Chris Powley have toured successfully as a trio for many years, and are joined by singing comedian, Andre King. The Howard Morrison Quartet Take Two will faithfully recreate a trip down memory lane for the followers of the original showband plus add some new songs and magic of their own.

Suitable for all ages.

We are pleased to advise that The Howard Morrison Quartet at the Bruce Mason Centre will now take place Saturday, 27th February 2021. Please retain your ticket/s as they will remain valid for the rescheduled show.

If you are unable to attend the rescheduled date you can request a refund. Please submit refund requests to Ticketmaster by clicking here.
Encore Theatre Collective is proud to present a dazzling new production of Seussical The Musical, based on the immortal works of Dr Seuss. Seussical brings to life many infamous and well-loved Dr Seuss characters, including Horton the Elephant, Gertrude McFuzz, Mayzie La Bird and, of course, the Cat in the Hat. These characters and stories weave together in a whimsical and wacky musical extravaganza, played out against an uplifting score, and highlighting the show’s universal messages of love and acceptance – reminding us all that “a person’s a person, no matter how small.”